Gruesome Red Band Trailer for The Autopsy of Jane Doe

A new red-band trailer has been released for The Autopsy of Jane Doe and it shows some of the gruesome autopsy in action. The film comes from director Andre Ovredal (Trollhunter), so expect a heap of supernatural, but monstrous, frights. Who is Jane Doe? You’ll have to watch the film and find out… 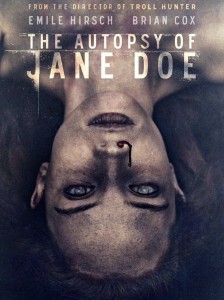 Brian Cox and Emile Hirsch play father and son coroners who receive a mysterious homicide victim with no apparent cause of death. As they attempt to identify the beautiful young “Jane Doe,” they discover increasingly bizarre clues that hold the key to her terrifying secrets.

We caught The Autopsy of Jane Doe at London Film Festival and we loved it; it’s packed full of genuine thrills and awesome thrills. It’s a simple and effective little chiller that is both damn scary and witty as hell. Look out for our review soon.

For now, check out the trailer and have a gander at a portion of the nightmares that await poor Austin (Hirsch) and Tony (Cox). The Autopsy of Jane Doe screens at LFF on 13th October and will be released in the USA on 21st December 2016.