Groovy Still From Ash Vs The Evil Dead 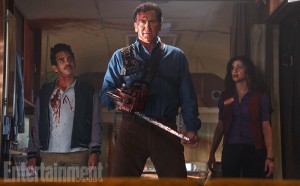 I don’t know why Ash would go meddling with dark spirits after the ordeal they put him through all those years ago, but in this new still he is back and braver than ever. Armed with his iconic chainsaw arm and a stance that means business, Bruce Campbell is Ash once again and ready to battle those pesky deadites. With a little help from his friends Pablo and Kelly, I am expecting mayhem, frights and plenty of comedy from this new supernatural fighting trio. With Sam Raimi on board to direct the first episode and plenty of sneaky looks at what the show is going to offer, expectations are high and the excitement really is beginning to bubble. 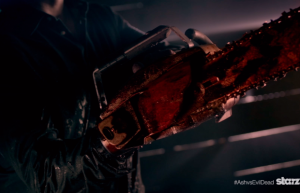 Synopsis:
After Ash has spent the last thirty years avoiding all responsibility attached to the deadite apocalypse and the possible destruction of the human race, he is finally pulled back into the middle of the dead drama. As the deadites threaten to completely wipe the planet clean, Ash has no choice but to face his demons, but the evil manifestation doesn’t have any plans to allow Ash to be the hero again.