I have never read anything by Duncan Ralston before. I always find that short story collections are a great way to introduce yourself to someone new. They give you a bit of variety of the writing style of the author. You can see very quickly where they intend to take their writing, and ultimately whether you see anything you are going to like. All of those factors made Gristle and Bone an attractive review proposition.

These are my thoughts on the seven stories included in the collection.

BABY TEETH
Candace McMurray and her husband Joel have just found out they cannot have children. This causes them to drift apart as this sort of situation often does. It’s heart breaking for both of them and neither knows how to deal with it.

One night, while sleeping Candace suffers a bite that looks like it could have been caused by a baby?

The next day, while working at home and trying not to think about the bite, she hears noises upstairs. Something has trashed a bedroom. It looks like it’s hiding in the attic. Candace goes to investigate. She should have called someone else to look.

An excellent way to start a collection of short horror stories and an excellent introduction to the writing style of Mr Ralston as I had hoped.

What starts as a heart breaking tale of something that happens to millions of people all over the world quickly turns into something horrific and brutal and sickening.

BEWARE OF THE DOG
Dean Vogel has returned to his home town of Dark Pines after being disgracefully discharged from the army. A condition of his discharge is he must live with his parents and he must go to the local shrink who he knows from his past as “Uncle Tim”.

Can they together unlock the secrets of Dean’s past to discover why he is the way he is? Is this all connected to the childhood bullies, one of which Dean left horribly disfigured.

What’s the story with his childhood crush, Catherine? She may hold more answers to the questions that Dean Knows.

Duncan Ralston can certainly write. The ease with which you fall into the characters in this story proves that. To have you feeling as if you know everything about someone in a short space of time is no easy feat.

A negative for me in this one is it took a while to build to the horror/terror element of the story, but when it got there it came out of absolutely nowhere. Great killer twist. Just dragged a bit to get there for me. I would have liked more detail on the horror side of things.

VIRAL
Tara Wells is a reporter. She has the mundane job of writing the music column. She spots a video clip of a girl that has gone missing. The video has gone viral due to the fact that the girl in the video appears to disappear before the viewer’s eyes.

Many people think it is fake including Tara’s boss but none the less the girl has gone missing for real. Tara eventually talks her boss into letting her investigate it for the paper. When Tara searches the girl’s house for clues, she discovers more than she probably wanted.

This is really good. A story of something bizarre that seems to happen but no one can believe it due to the technology of today allowing people to stage elaborate hoaxes for fun. Something in Tara convinces her that what she is witnessing is true and drives her to investigate it for herself.

This leaves you wondering the whole way through. I must admit to thinking it was all going to be some bizarre joke played by kids but it turns out to be much much more.

Again perfect pacing keeps you glued to this story. I felt on edge almost the entire time waiting with baited breath to find out what was going on.

Apart from #37, Amber. She didn’t want to play and was dumped out of the van early. Ian didn’t get to pick her up. Instead she was picked up by a psycho, raped and murdered.

They have now picked up Zara. She is #201. Something doesn’t seem right though. Her eyes keep changing colour. It’s as if she is possessed.

Really liked this one. Not going to give anything away on the story but it’s grittier. There is blood and guts. Gorey descriptions of murder and mutilation, and to top it all off, touches of the supernatural and horror elements. This certainly was a delectable tale of terror.

// END USER
Mason gets woken early one morning when he gets an email. The email is from himself. He knows it can’t be real and someone must have hacked his account and be messing with him. When he is on the way to work the train is delayed by someone jumping in front of a train.

When mason gets to work the emails continue, including one with a video attached. A video of the alleged jumper although it doesn’t look like an accident.

Mason continues to get bombarded with emails and videos. When he leaves work early and goes home, things take a bizarre twist and threaten not just Mason but the entire world.

This is freaky. This genuinely scared me. I doubt what happens in this story is possible but hey, technology is a wonderful scary thing. I consider myself a bit of a tech head and this type of scenario is what nightmares are made of.

One man battling something that no one would believe, struggling to believe it himself and figure out a way to save himself and ultimately the world. This story had so much potential to be much longer. I would love to see it expanded.

FAT OF THE LAND
David and June have gone to Monte Verde to attend a friend’s wedding. When they ask the hotel receptionist for advice on a good restaurant, she directs them to Ambrosia.

The dramas continue the next day at the wedding when one of the grooms fails to turn up. June returns to Ambrosia to take some professional pictures of the restaurant. What she discovers there is both astounding and equally horrific. Will the missing groom turn up or has he already left for dinner?

Duncan Ralston is a story teller, of that there is no doubt. I always say one of the hardest things about short stories is to have the ability to suck your reader in from the first sentence. He does that very easily with this story. It has a certain atmosphere about it. You just know something horrific is going to happen. When it does, I can’t say it was totally a surprise to me but its delivery was perfect. I mean this as a compliment but the final scenes were almost like something from a Scooby Doo movie. Everything would have been fine if it hadn’t been for those pesky kids.

SCAVENGERS
Jim and Leanne own a restaurant in the small town of Knee High. When Jim empties the trash in the dumpster every night he has to battle through all kinds of scavengers desperate for a scrap of something he is throwing out.

One night he witnesses a human form crawling down the wall, head first, heading for the dumpster. He recognises the lady but not the form she is currently in. Putting aside his fear he decides he must kill this beast before she kills him or anyone else. When he discovers there are more of these “lurkers” he must come up with a plan to kill them all together.

In an unlikely alliance he enlists the help of his wife Leanne to try and rid Knee High of the scavenger scourge.

This is what it’s all about. This is why I read horror/dark fiction. This takes us back to the good old days of horror in the ‘80’s. It’s good versus an ancient evil that lurks in every town that none of the residents know about. This stinks of Laymon at his best.

This is how you tell a horror story or a story of terror and keep your audience hooked from the first paragraph to the very last. Bravo Mr Ralston. The best story in the book. 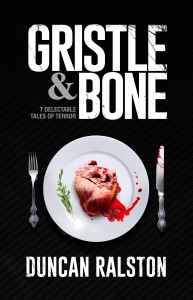 To summarise: So there you have it. My take on Gristle and Bone. All in all this is a very good collection. The surprise for me was really the horror or terror as it might be called. Each story is very different in its make up with styles that are nothing like each other but at the same time the level of horror/terror is high.

The terror element is scary for varying reasons. It’s not make you jump out of your seat terror. It’s slow build up terror. Terror that seeps under your skin and scares you without you even realising that you are scared until you finish reading.

Duncan Ralston has certainly proved to me he can write. Even though this is a short story collection, a few of the stories are quite long which I for one was delighted to see. Too often I come across a collection that has ten stories in it and it’s done by one hundred pages. You get your money’s worth with this one. He has a knack of absorbing you in the story very quickly. You feel at ease with what you are reading after only a couple of pages and the rest just flows very easily across the pages.

A collection of stories that will have you glued to them form the first words. They will scare you for different reasons. They will turn your stomach. They will make you wonder “where the hell did that come from”. Most of all they will give you a few hours of enjoyable story telling. An art that isn’t easy to do.