Synopsis:
Dani has it all to live for. Seventeen years old with her life in front of her. Unbeknown to her, her dad is involved with the mob in London. After a failed assassination attempt, her dad is now the target of the mob. He is a loose end that needs to be tidied up.

When the assassin arrives to kill her dad, Dani is in the house with the rest of her family. She is the only one to survive.

Left with a Chelsea Grin, you would imagine her life is over. No one banked on Dani settling the score. 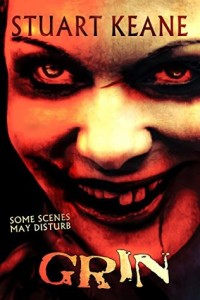 Characters in this one are led by Dani herself. A normal seventeen-year-old girl, but after what happens to her (I won’t tell you here but it is brutal) her life completely changes. She goes from an unassuming young girl to a very quickly grown up adult, full of hatred and loathing and pain and horror and most important of all, vengeance. She only has one ally in all of this, Jack Scott, the policeman who came to her aid after the initial attack. You don’t see much of him apart from the beginning and end but he seems a good enough fella.

The evil characters in this one are the man who caused her pain, Bradley and his boss, Ross Rhodes. Both are just absolutely abhorrent. Bradley is one of those characters that, when you meet him, you just want to climb into the book and do him yourself! His boss isn’t much better. He is the typical mob boss who gets others to do the dirty work for him. He is the thinker though, and the one directing things so this makes him worse in my eyes. There are a host of other baddies involved and they are all as nausea inducing as each other.

The plot is simple. Dani is done wrong by, and she wants to get revenge. The end.

Not really though. This book is a horror. When I started to read it though I thought this is more of a thriller plot than a horror. Then I read on. This book is about as horrific as they get. In many different ways.

You have the horror of the blood and guts. Believe me there is a lot. There is a warning on the front cover about some scenes being disturbing but to be honest I never take much notice of those warnings. I must remember to in future. This book made me sick in my own mouth. It ruined more than one meal for me. It was bloody to the point of me wanting to throw it away a couple of times. This is good though. It’s horror, it’s meant to be bloody right? Well yes and no. Horror can be horror of the mind as well and is sometimes more effective than the blood and guts.

Horror of the mind is the next best thing about this book. What Dani goes through is something that no one can ever comprehend unless you ever actually do go through it. I pray for each and every one of you that you don’t because, it is horrific in the extreme. Physical and mental torture and horror that would drive the hardest of us to an early grave. I felt very emotional at times reading this book because I felt so so sorry for Dani and what she was going through.

When the blood and guts bits aren’t happening, you look for a bit of a break to get your breath back but with Grin, the relaxing bits are the psychological horror bits that just turn your mind upside down and inside out.

So, I didn’t expect this but my god this has introduced me to Stuart Keane’s work in a fantastic way. I have to say he doesn’t write like he seems as a person on Facebook and such like. He seems a fairly decent chap. Until he writes.

He is one of those authors that I put into the easy category. Now I’m not suggesting he is easy, although some rumours are doing the rounds. What I mean by that is that you slide into the book very easily. It doesn’t take you long before you feel totally at ease with what you are reading. You feel as if you have known the characters for a long time after only a few pages. It flows extremely well and is paced perfectly for the different types of horror featured in the story. It has blood when it needs it and emotion in abundance in both the bloody parts and the head feck parts.

So after not reading Mr Keane’s work before, I understand I have a bit of catching up to do. For that, I am very excited because after getting a flavour of how he can write, I am now convinced that I have some wonderful stuff ahead of me.

To summarise: A horror with more horror than some horror’s I have read recently all put together. Bloody and brutal but at the same time full of emotion that will have you holding your breath and turning those pages as fast as you can.