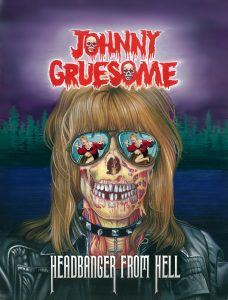 Greg Lamberson, the director of shlocky comedy-horrors including Slime City, Slime City Massacre and Killer Rack has finally been attached to direct Johnny Gruesome. The Johnny Gruesome story was originally written in 1984, so it has been waiting for a screen adaptation for quite some time. The script was published as a novel back in 2007, but other than that, Lamberson has kept it pretty quiet.

Johnny Gruesome is a death metal zombie horror that follows the strange demise of Johnny Gruesome’s enemies. After metal-head Johnny’s supposedly accidental death they start to drop like flies; we wonder who’s to blame for the killing…

Could this be the next Deathgasm? We hope so!