Synopsis:
A college student travels to a Peruvian jungle with a group of social activists and is kidnapped by the tribe of indigenous cannibals that her team are trying to protect. 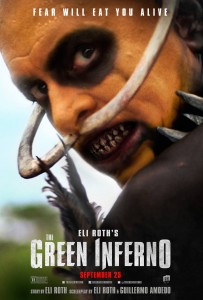 After six years of directorial dormancy, horror connoisseur Eli Roth returned to the genre with this top-notch cannibal/ activist flick, The Green Inferno. This fun and gruelling love letter to directors Deodato (Cannibal Holocaust), Margheriti (Cannibal Apocalypse) and Lenzi (Cannibal Ferox) is Roth’s finest hour and marks a significant step forward for the director in terms of refining his craft. Even during Roth’s latency period following Hostel Part 2, the enfant terrible still remained active in horror, producing Ti West’s The Sacrament, The Last Exorcism, The Man With The Iron Fists and numerous other creepy and/ or blood laden features. Roth also helmed a short for Tarantino (Stolz der Nation), an episode of Hemlock Grove then acted in Inglorious Basterds and Death Proof. His most recent directorial work Knock Knock, filmed after The Green Inferno, had a theatrical run in the UK, while TGI languished in release scheduling purgatory for two years after its completion. The delay was due to a spat of financial anxiety by distributor Worldview Entertainment. Worldview initially stalled the UK and US releases but now (finally) on 25th March 2016, The Green Inferno will receive its UK cinema debut, thanks to a distribution deal with Blumhouse-Tilt. 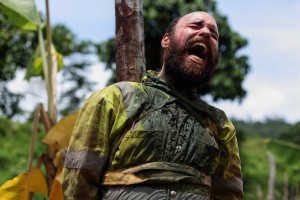 Brazenly inspired by Cannibal Apocalypse, Ferox and Holocaust, Roth’s fourth feature is much more than a style-rifting cash-in on the films that fired it. The Green Inferno is an exciting and venerable subgenre homage, crafted with a barefaced love for horror that is sure to resonate with fans. Roth doesn’t simply salute the cannibal horror subgenre but assimilates interesting characters with radical twists which propel it from the arena of artless exploitation, into a far more illustrious terrain. Ubiquitous politics are augmented and addressed, and TGI is further complimented by a riveting plot along with expertly fashioned gore and torture scenes (courtesy of Howard Berger and Greg Nicotero) that are sure to send the lesser desensitised, scurrying down the cinema aisles with handfuls of involuntary vomit. Maybe that’s a slight exaggeration but Roth knows his stuff, and his target audience. While his previous features, Hostel and Cabin Fever, were festooned with a juvenile air, Roth here utilises that inherently playful demeanour and uses it to his advantage.

Stoner jokes are incorporated but not rife, distracting or secondary to the narrative. One even spurs an ingenious suspense sequence. Meanwhile, the adolescent sex jokes that graced the Hostel franchise have lightened and (unlike Hostel and Cabin Fever) The Green Inferno is not just a film about a bunch of twenty-something’s who get attacked by malevolent forces while journeying to new and unnerving territories. Well ok it is, but the characters in TGI are much more mature, and their excursion is a great deal more important than the hedonistic holidays in Roth’s previous works. The protagonist Justine (Lorenza Izzo) is quietly opulent with bothersome conflicts, mental stipulations and a vested interest in the activists cause. Her father is a lawyer at the United Nations which the leader of the group Alejandro (Ariel Levy) aims to capitalise on. The supporting characters are similarly multifarious and not just blabbering sacks of pre-lacerated flesh, biding time before they are inevitably slain and devoured. 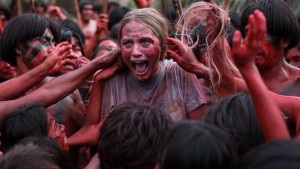 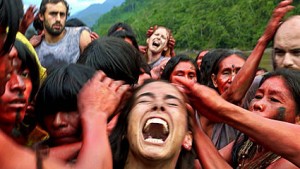 While many of the films that followed the controversial Cannibal Apocalypse in 1980 were merely deplorable cash-ins, The Green Inferno does more than simply writhe in similar gannets. Roth rustles some of the most gut-wrenching blood eruptions, throat slashing, eye-gouging and limb-ripping gore blasts seen on cinema screens in a while, but the violence is implemented with a degree of integrity and is not as reckless or fervently depicted as it is in Cannibal Holocaust. Roth’s spirited nature, and some welcome comedy, lightens the mood slightly, but he manages to summon sufficient dread and suspense where required, while plaiting prevalent themes, the likes of which have yet to be properly addressed in mainstream film-making. The subject of female genital mutilation is touched upon while dubious agendas and the scrupulous natures of corporations, political movements and the activists’ ethos are all scrutinised for added substance. 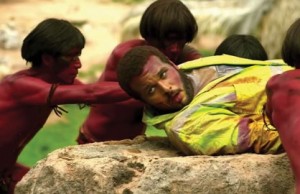 Extra visual elegance might have gone some way to enriching TGI, in the form of some slightly more rousing and emotive cinematography, but this may have also resulted in an ill-fitting tone, for The Green Inferno is neither high art nor low brow. It hovers mid-way between the slick and the soiled or the grimy, grainy and mad. The set-up slightly stammers but TGI undoubtedly remains one of the greatest cannibal horror films ever made (it’s definitely the most entertaining) and places Roth in the ranks of a true genre legend. Roth’s love for horror has always been patent and his stories all stem from unique central concepts. While The Green Inferno is slightly less distinctive than his previous features in terms of subject matter (cannibal horror has been done before), the finer details and context in which the story unfurls is both unique and intriguing. The Green Inferno is also more finely crafted and refined with impressive editing (by Ernesto Diaz Espinoza) and performances, suggesting that Roth is ripening into a not only a greater film-maker but a bone-fide master of horror.