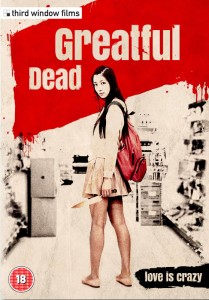 Synopsis:
In the wake of her dysfunctional childhood, Nami (Kumi Takiuchi) is a young woman with a broad range of perverse fixations. One of her most frequent preoccupations sees her assume the role of a peeping tom. With one specific gentleman however, this passive peccadillo is about to develop into something more sinister.

Heading for their 10th anniversary next year is the indie label Third Window films, who have brought into the UK market a mix of Far Eastern drama, comedy and anything offbeat that fits their philosophy. Horror movies have often been something that Adam Torel and colleagues have shied away from, but when they have acquired the occasional slice of the ghoulish, they’ve tended to do so with edgy, eyebrow raising material from visionary directors who are determined to grab hold of the genre like a Rubik’s cube and twist and turn it into something unrecognisable; see Sion Sono’s COLD FISH, Shin’ya Tsukamoto’s KOTOKO and Takashi Miike’s LESSON OF EVIL for prime examples.

Their latest foray into malevolent territory brings us GREATFUL DEAD from director Eiji Uchida which whisks together a little social commentary to accompany its treacle dark comedy and gruesome bloodletting. It opens by giving us a glimpse into Kumi’s childhood as we learn of her mother walking out on her family in order to help poverty stricken children in Africa, while her father retreated into a world of Provencal omelette’s. All of which leads Nami to have a fragile grip on reality with her formative years spent in near isolation, comatose in front of television shopping channels. Fast forward to Nami at 20 years old and following a sizeable endowment left to her by her father (who committed suicide), she spends much of her time with binoculars in hand ‘solitarian-watching’ – observing those in society who’ve gone crazy due to loneliness, though one in particular, Mr. Shiomi (Takashi Sasano) bears the brunt of much of her obsession.

Uchida states that he wanted a notable contrast between the first half of the movie and the second – something he’s achieved successfully as the shift in tone is stark as it moves from comedic tale into a sinister, unforgiving denouement where its journey into the macabre becomes increasingly uncomfortable. It comes as no surprise to hear Uchida declare his appreciation for Sion Sono’s LOVE EXPOSURE as such thematic juggling is interwoven through GREATFUL DEAD with its ambitious narrative. Impressively though it’s managed with a deft hand as the film retains a sense of balance, rarely moving far from its character study roots.

Credit for this lies with the director, although the outstanding performances from veteran Takashi Sasano and mor notably newcomer Kumi Takiuchi – who elicits both sympathy and revulsion in equal measure – anchor the film subtly, and instead of the predictable descent into superficial shock-fest we’re left with a profound allegory about solitude, society and an increasingly isolated aging population