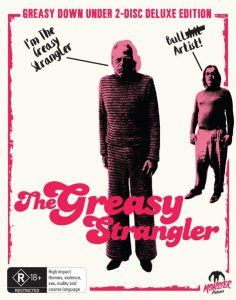 Our antipodean friends are some lucky buggers. Australian horror specialists Monster Pictures have just revealed details of their upcoming “Greasy Down Under” home release of Jim Hosking’s The Greasy Strangler, and it’s by far the most substantial, extras-packed and downright greasy version available anywhere.

Hosking’s batshit crazy comedy ranks amongst my favourite genre flicks of recent years. It’s deliciously repulsive on numerous levels, mesmerizingly weird and utterly hilarious, and seems to have come from an alternate universe of cinema where staple storytelling tropes are recognisably present, but skewed and bastardised into something entirely alien.

Limited to just 2000 copies, Monster’s Blu-ray clearly has the collector in mind, and comes with some striking new artwork. It hits Australian shelves on March 22nd, along with DVD and On Demand versions. Read on for the full breakdown of the package’s greasy contents: 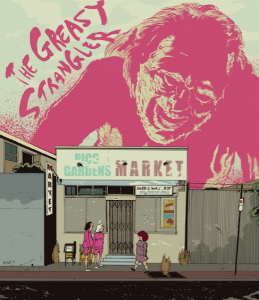 Phew. That’s a whole lot of grease for your money.