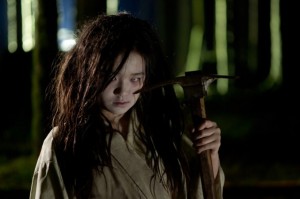 Synopsis:
Maiko (Kaitlyn Leeb) and her college friends are heading into Suicide Forest in the vain hope that a Halloween ritual will release the trapped soul of her late mother. As they film the ritual though, strange goings on begin to take place around them.

Ten years or so of SyFy original movies have mainly concerned themselves with a conveyor belt of creature features. Every now and then however, they turn their attention to the occasional horror movie – and with a modicum of success. RISE OF THE ZOMBIES with Danny Trejo was one that turned into a well-made genre flick, while last year’s ZOMBIE NIGHT which featured the ubiquitous talent of Daryl Hannah ticked many aficionados boxes thanks to the direction of John (FEAST) Gulager.

Airing on the channel last Halloween and finding its way onto UK DVD this month is the Steven Monroe directed GRAVE HALLOWEEN. Most of you will recognise the director’s name from the moderately successful reboot of Meir Zarchi’s iconic I SPIT ON YOUR GRAVE, but he does in fact have a long CV of SyFy films under his belt with such enamouring titles as ICE TWISTERS and MONGOLIAN DEATH WORM. The mediocrity of those two (and I’ve seen them both) does not thankfully eek its way into GRAVE HALLOWEEN – but that’s a backhanded compliment in itself by damning it with faint praise.
The issue with this feature is simply the jarring fusion between J-Horror and a made-for-TV sanitised scare-fest. The narrative is burdened with an overly complex backstory where we find Eastern mythology shoehorned in to facilitate this story of Maiko’s mother as well as the ensuing segaki ceremony that Maiko feels will provide her mother with an eternal peace. All of which – fascinating though it genuinely is – feels ungainly inserted as the film itself seems more concerned with developing the Evil Dead vibe that it so obviously craves.

Once this intention comes to the fore, all of the early ancient Eastern superstitions are cast aside as we travel through the usual motions of a poorly paced lazy American ghost story – albeit shot in Canada. Aside from Kaitlyn Leeb as Maiko, few of her friends stand out amongst the ensemble; instead they all blend in to that template of off the shelf generic photo-fit supporting cast members whose names neither resonate nor alter your lethargic viewing experience.

GRAVE HALLOWEEN is a real let-down in what was becoming a sturdy slate of SyFy horror titles. I’m sure the recent Ray Wise picture DEAD STILL, not to mention the highly anticipated Tobin Bell starring FINDERS KEEPERS will steady the ship, but this asinine Monroe directed feature is a step backwards for the channel, and undoubtedly one in which adds to the rulebook “don’t let the guy that made MONIKA attempt mythologically orientated Far Eastern rooted supernaturally themed horror”. It’s just not going to work out.