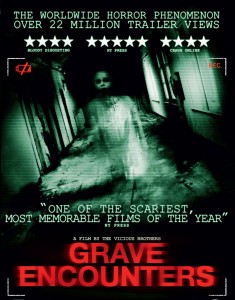 Synopsis:
White filming a new ghost hunting TV show, Grave Encounters, Lance Preston and his crew investigate the long abandoned and deeply creepy Collingwood Psychiatric Hospital. As part of the show they are locked in overnight. What follows just goes to show that just because you don’t believe in ghosts; it doesn’t mean they don’t believe in you…

Confession time; I love paranormal television programmes. Ghost Hunters, Most Haunted, Ghost Adventures, Paranormal Witness etc., love them. I’m not going to go into my beliefs on the subject, but primarily, these programmes entertain me, which should be their chief aim in my opinion. They are not scientific documentaries (Even Ofcom agrees with me on this). I certainly don’t believe every muffled bang and dust particle (sorry, ‘orb’) they capture is evidence of the supernatural, and there’s lots to pick apart and make fun of in these shows.  As the audience, we know all the people involved in these shows are never in any real danger from marauding and vengeful spirits, but what if they were? That’s the premise of Grave Encounters, a found footage film directed by The Vicious Brothers.

The best bits of this film are in the in the first half. We are introduced to the ghost hunting team via a fun intro sequence to the Grave Encounters show. In manner of other paranormal investigation programmes, it’s properly cheesy, has a great ominous voiceover, and there’s lots of slow motion wandering through graveyards and so forth. Sean Rogerson, who plays host Lance Preston, is especially good in his mannerisms and delivery as a ‘paranormal professional’. There’s a nice cynical scene where they bribe the gardener at the Collingwood Hospital to claim on camera that he saw a ghost. The hospital itself is an imposing structure, and according to Kenny the caretaker, chock full of creepiness – a window that opens by itself, the scribbled ravings of a former patient, a bathtub where a girl killed herself, dark and eerie service tunnels.  All and all it’s setting up to be a scary little film at this point. And it continues to be for a while, once the crew are in ‘Lock Down’, and small events start to happen; a wheelchair moving, a slamming door, footsteps, gurneys being pushed over, hair being pulled etc. Satisfied they have all the footage they need, the crew wait for Kenny to come and let them out. But Kenny never comes. The hospital has no intention of letting them leave. All doors lead to more corridors, the stairs lead to nowhere and time has gone crazy. At this point the crew descend into bickering and crying, and then the ghosts really make themselves known, via the medium of not terribly good CGI. The rest of the film is basically the crew fighting, crying, running around and then being picked off one by one in not very scary ways, until only Lance is left, alone and certainly slightly mad at this point, surviving off rats in the service tunnels. Professional until the end, he still hosting for the camera when he discovers the true nature of what the doctors were doing to the patients all those years ago.

There are three prongs of attack when it comes to reviewing this film – as a homage/parody of ghost hunting television programme, as a horror film, and as a found footage film.  As for the first prong, I thought the film makers did this part really well. Even television programmes about ghosts and the supernatural are just that, television programmes, and therefore business must always take precedent over the mystical, something the film portrays well. Second prong; is it scary? Not really. The creepiest bits were early on, with the more subtle scares – the small movements and the things that you catch out of the corner of your eye, a la Paranormal Activity. But for me, once they bring in hell in a hand basket, with the bad CGI ghosts, any tension the film makers might have built up goes completely out the window. Especially with the dull repetition of; the group fight, scary thing happens, they run, lock themselves in a random room, the group fight, scary thing happens, they run…That’s just boring. If the film that kept to the subtle scares, and dumped the CGI ghosts, it would have been a lot better. After all, nothing is scarier than what you can conjure up in your own mind. That’s partly why ghost hunting shows work – the team on the show hear a strange noise, we all know it’s probably a car back firing or something but there’s always the ‘what if’ factor. The concept of being locked in an abandoned loony bin was chilling enough be itself, it didn’t need to up the ante quite so much.  As for prong the last, is it a good found footage film? Kind of. As mentioned, it wasn’t particularly scary, but it is a good concept for a found footage film. They have reasons to keep filming (initially because they’re filming their show, later because they need the light), which is often a reason why found footage films can be frustrating – why these idiots are still filming themselves having a horrible time of it. We’re in serious danger of reaching found footage film fatigue right now, there seems to be so many of them, so is Grave Encounters a passable entry into the oeuvre? Well, I use my own personal bar to judge found footage films; did it enrage me off as much as the ending of The Last Broadcast (made in 1994, seen by many as the predecessor to Blair Witch Project, gut wrenchingly bad ending)? The answer is no. If you still haven’t had your fill of found footage films, it’s definitely worth a watch. And with that, on to the next…that was a Ghost Hunters reference by the way. Christ, I’m cool.