Not to be mistaken for Wes Craven’s airborne suspenser, Tristan Clay’s Red Eye has been picked up by Terror Films, whose press release warns that “The film is not for those with a weak stomach and contains some graphic and violent scenes. “It’s so gory,” the release continues, “that Terror Films had to request that the filmmaker remove at least one moment in the story or risk having the film rejected by major digital platforms.”

Curious? Thought so. If you’re keen, you don’t have long to wait, with the film hitting digital platforms on February 9th. Before then, you can get a taste of the low-budget shocker with this trailer, although any serious gore is unfortunately withheld. 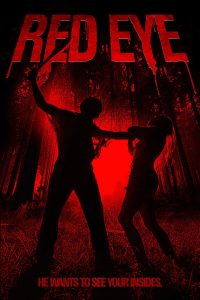 The film centres on a mythical masked maniac known as Red Eye, who stalks the backwoods of Black Creek, West Virginia.

“Gage Barker (Scott King), a young man who grew up on the tales of Red Eye as a kid, learns that there could be some truth behind these folk tales. With a group of his friends and his camera equipment in tow, they hike into the woods to seek him out or to prove that he is nothing more than a myth.”

Following its US digital release Red Eye – which has picked up a number of festival awards – will hit DVD, and expand to international markets through iFlix, iTunes and Amazon International