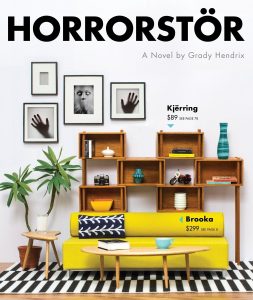 New Republic Pictures, which co-financed and produced the Oscar-winning film 1917, has optioned the rights to Grady’s Hendrix’s New York Times best-selling novel Horrorstör to develop into a feature.

Released in 2013 by Quirk Books, Horrorstör is set in Cleveland, Ohio at the Orsk furniture superstore, where something strange is happening. Every morning, employees arrive to find bookshelves broken, glassware shattered, and sofabeds vandalised. To unravel the mystery, a group of employees volunteers to work the dusk-till-dawn shift—putting them face to face with horrors that defy the imagination…

Hendrix, who wrote last year’s Satanic Panic, is adapting his own material for the first time. The author’s other novels include My Best Friend’s Exorcism, We Sold Our Souls, and The Southern Book Club’s Guide to Slaying Vampires.