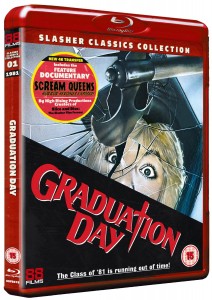 Synopsis:
Young Laura has everything to live for; a budding athlete the able track star pushes through the pain barrier- mostly at her sadistic coach’s insistence- to excel in competition. Things couldn’t be going any better that is until she has a heart attack while crashing through the finish line as she takes first place in a race. Older sister Anne returns from the U.S. Navy some time later to collect Laura’s Graduation prize in her memory, but something sinister is going on at Laura’s school – Midvale High students are being killed off in vicious ways by an unseen killer. But what do these two seemingly unrelated incidents have to do with each other? Most importantly with many possible suspects in the frame can local detectives uncover the clues and solve the case before anyone else gets hurt?

If we can take anything away from Herb Freed’s Golden Age cult slasher Graduation Day it is that exercise isn’t necessarily good for you- maybe it’s best to just stay at home and watch horror films on that comfy sofa after all? Not only does the film’s central character die in the first five minutes while competing for the school track team, but the victims also seem to be connected to that fateful day when life ended for the up and coming athlete Laura. With a killer that stalks victims and uses a racing stopwatch to time murders it would appear the message here is stay away from gym class. Not that anyone is complaining here, giving the film a slightly ‘athletic’ based theme means that there is also the opportunity to pick out victims decked in retro nylon tight fitting shorts, girls in lycra leotards and meat headed jock footballers. It also exploits the fun twist of using gym class equipment such as fencing swords, and a football fitted with a custom bayonet, as a way to dispatch the unwitting headcount fodder.

Graduation Day came out in a rare vintage year for the slasher. 1981 seemed to be THE year when many fine examples of classic sub-genre fare were being served up. So we had genre greats such as My Bloody Valentine, The Burning, Evilspeak, Bloody Birthday, The Prowler, Absurd, Nightmares in a Damaged Brain, Happy Birthday to Me, Bloody Moon, Deadly Blessing, Madhouse, Halloween II and The Funhouse- to name a few- to be born from this year. Even though Graduation Day was competing in such a bunch of strong contenders, this early Troma distributed movie was still a respectable box office success for the time, and retains the status of cult fan favourite.

Part of the success of the movie as an enduring cult fave is the mix of- what have become to a modern day audience- clichés, in just the right amounts. Scriptwriter and director Herb Freed was not a name well versed in horror film particularly, although he had made a couple of attempts prior to this early eighties entry- Haunts (1977) and Beyond Evil (1980). Yet here he demonstrates a strong understanding of his audience. So for its time Graduation Day serves up the red herrings, ample killer POV shots to set mood, innovative killing (highlight involving a pole vault and spiked mat), nudity, and a great eighties retro soundtrack, complete with a roller disco scene- which doesn’t quite rival the disco dancing of Prom Night, but it adds perfect vintage camp flavour. The acting standard all round is also a notch above many likeminded flicks, the tension is just right plus there is some goofy comic relief to enjoy too. An early appearance from a fresh faced head slasher Scream Queen Linnea Quigley as the manipulative and Lolita-esque Dolores has made this essential viewing for many sub-genre fans.

So it is with this title that 88 Films continue their Slasher Classic Collection with one of their best releases thus far. This UK Blu-ray edition is presented in fabulous high definition from no less than a 4K scan making for a sumptuous print that thankfully hasn’t been ruined by over digitising. Not only does the main feature come presented in a deliciously glorious upgraded version- which literally breathes new life into the movie- but it is packaged with a generous bunch of extras as well- not least a full feature length documentary SCREAM QUEENS: HORROR HEROINES EXPOSED (a little more on that in a moment). For this reviewer – who has previously owned this release on a budget label DVD version, and having watched this film back in the day on VHS- seeing the film rendered here on to Blu-ray was like watching a completely different movie. Scenes, especially the ‘Linnea Quigley’ stalking scene and consequent murders surrounding this set piece, which were previously difficult to see due to the dark nature of the setting, are now fully visible and able to be enjoyed as never before on home video format. The film seems somehow more brutal and while not overly bloody, the effects on offer now shine for the digital domain.

Back to the  extras, the SCREAM QUEENS: HORROR HEROINES EXPOSED documentary included here is a must for all fans making this edition a very worthy purchase indeed. Headed up by Troma actress Debbie Rochon, the feature length film talks to an inordinate amount of lovely ladies who have been involved in the industry over the years, who all talk candidly about the parts they played and the highs and lows of being a scream queen in horror- this includes the unholy trio of Scream Queen legends Michelle Bauer, Brinke Stevens, and Linnea Quigley. While modern day names such as Danielle Harris join the large ensemble to add her voice. Other extras included are: GRADUATION MEMORIES: AN EXCLUSIVE INTERVIEW WITH AUTHOR AND CRITIC JUSTIN KERSWELL, COLLECTOR’S BOOKLET BY CALUM WADDELL FEATURING AN IN DEPTH CONVERSATION WITH GRADUATION DAY STAR PATCH MACKENZIE, Intro By Lloyd Kaufman creator of The Toxic Avenger, Interview with Scream Queen Linnea Quigley, Tromatic Filmmaking Classroom: The Arm Rip, The Cannibal Lesbian Hoedown Music Video Directed by Lloyd Kaufman, Theatrical Trailer, 88 Films Trailer Reel and Reversible Sleeve without logos.

So top marks to 88 Films for this one, the quality look and feel is bound to please existing fans, while this upgraded, extras laden edition makes this the perfect time to pick this up if you haven’t already.