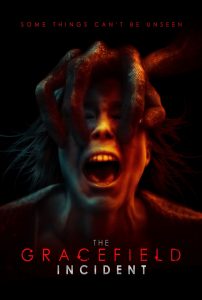 Science fiction thriller The Gracefield Incident rises above the low-budget, cinema verite–shocker pack in some cases, but gets mired in cliches and other problems of the subgenre quite often, as well. Overall, director/star/co-writer/editor Mathieu Ratthe’s debut feature has enough positives going for it to warrant a watch.

In this United States/Canadian co-production, video game editor Matthew Donovan (Ratthe) and his wife Jessica (Kimberly Laferriere) are looking forward to their upcoming ultrasound for the baby they are expecting when a traffic accident claims both one of Matthew’s eyes and the unborn baby. After a long grieving and adjustment period, the couple travels with four other friends and relatives to a chateau deep in the woods of Quebec that was offered to them by one of their bosses, who just so happens to be a Bigfoot believer.

The group sees something streak through the sky, buzzing close overhead, and some of the party naturally goes to have a look. Soon enough, they realize that something is after them, both physically and psychically. Their vacation turns into a long night of terror.

Unknown at first to the group of friends, Matthew has installed an artificial eye that houses a video camera. This gives viewers one of the points of perspective from which we see action take place; others include a handheld camera, and CCTV cameras within the home. The usual pitfalls of using first-person–perspective in a fright film apply here, but to Ratthe’s and cinematographer Yan Savard’s credit, the solid camerawork in The Gracefield Incident is far less shaky than most movies of this type. Ratthe’s editing is also impressive.

Viewers who loathe seeing characters make stupid decisions should steer clear of The Gracefield Incident, which features such moments as someone running off solo into the woods at night when obviously something strange is going on, and one character sticking his bare hand down a hole made by a meteor-like object that crashed to Earth just minutes before. Viewers seeking sheer escapism who are willing to take such incidents in stride, though, are likely to have fun during these and similar scenes.

The Gracefield Incident has some intriguing moments of character development and dramatic heft to it, including the fractured relationship between Matthew and Jessica. Elements that go beyond mere jump scares are in play, as well; for example, strange symbols that appear in different places add some mystery to the proceedings. The film is weighed down, though, by common first-person–lensed genre movie tropes such as constantly panning to catch characters’ facial expressions as they wonder aloud about the sound they heard just out of view, and then lingering on that shot.

Special effects supervisor Guillaume Murray and the visual effects team have done a crackerjack job. The creature design is very cool and the soaring lights in the sky are striking, as well. The performances are generally very good, with the cast giving its all even when some dialogue and underdeveloped character traits occasionally hamper things. 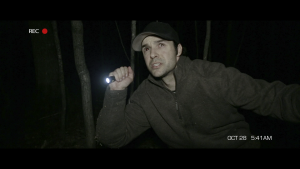 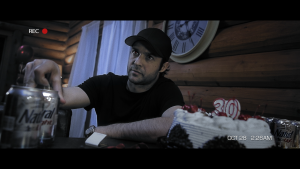 Mathieu Ratthe wore a lot of hats in this labor of love, and did a rather admirable job on this low-budget indie effort. Fans of creature features who aren’t overly bothered by the first-person–perspective approach of cinematic storytelling should have some fun with The Gracefield Incident.

The Gracefield Incident screens in cinemas, and is available on VOD, beginning July 21.