Coming to VOD next week from Wild Eye Releasing is the apparently Underworld-esque action-horror Demon Hunter. We’ve got the seizure-inducing trailer for you below, plus a few stills.

Co-written and directed by Zoe Kavanagh, the film put in a festival run beginning in 2016 under the title Taryn Barker: Demon Hunter. It stars Niamh Hogan as Taryn, a half Demon, half human who helps a detective rescue his daughter from a sinister cult. Here’s the official synopsis: 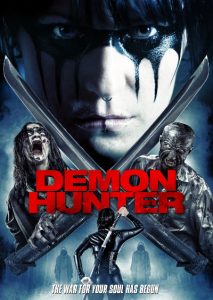 After she is captured by police for questioning in the slaying of a man she claimed was a demon, Taryn Barker must prove her innocence, and the existence of demons. But when a cult captures the daughter of one of the detectives on the case, the police must trust, and unleash, this warrior on the Satantic group who are intent on bringing an ancient evil force into the world.

Demon Hunter will be available on VOD and digital from August 15th.