Gorgeous New Poster for The Shape of Water 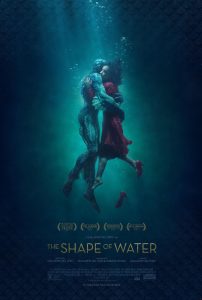 Guillermo del Toro recently took to Twitter to share the new poster for The Shape of Water and it’s gorgeous. It touches on the fairy-tale aspect of the story with a Cinderella-esque display of a lost shoe and focuses on the unlikely relationship at the centre of the story. The choice of colours and the underwater lighting is simply stunning.

Synopsis:
From master story teller, Guillermo del Toro, comes The Shape of Water – an other-worldly fable, set against the backdrop of Cold War era America circa 1962. In the hidden high-security government laboratory where she works, lonely Elisa (Sally Hawkins) is trapped in a life of isolation. Elisa’s life is changed forever when she and co-worker Zelda (Octavia Spencer) discover a secret classified experiment.

The Shape of Water has received abundantly rave reviews since screening at a variety of festivals around the world, including the Busan International Film Festival, Sitges Film Festival and LFF in London. It’s been praised as a triumph, with many critics appreciating its touching storyline, as well as the leading performance from Sally Hawkins. With Crimson Peak’s DP Dan Lautsten on-board with this one, expect to be blown away by evocative imagery and elegant cinematography.

The Shape of Water will be released in the USA on 8th December, before hitting the UK on 16th February 2018. For now, remind yourself of the beautiful trailer below.