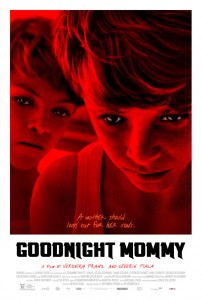 It’s always fantastic news when a great and deserving  horror film is getting widely recognised. Austria’s Goodnight Mommy has already won 14 awards since its debut screening in 2014, and now it is going to be considered for the Best Foreign Film award at 2016’s Academy Awards.

Speaking about the consideration, directors Veronika Franz and Severin Fiala have said, “It is a great honour for us to be the official Austrian submission for the 88th Academy Awards. We are extremely proud and very excited. When we set out to make this film, we had no idea how big things could become. Every movie starts small: one person (ok, two in our case) has an idea, on his own, all alone. Then, begins a long journey with no one knowing where it will end. Our journey has been incredible so far and we can only hope that it ends at this year’s Oscars.”

It would be great to see Goodnight Mommy at the Oscars to wave the flag for cinematic horror and world cinema. The film has received such an overwhelming response so far, and the ultimate appreciation would be an Oscar nomination, if not a win in 2016. Our fingers are crossed!

The Academy will decide which 5 films will be nominated for Best Foreign Film in January 2016, with the award ceremony itself taking place on 28th February 2016 in Los Angeles.