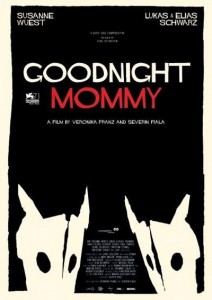 Synopsis:
Lukas (Lukas Schwarz) and Elias (Elias Schwarz) spend the long, hot summer days playing in the fields surrounding their home somewhere in the remote Austrian countryside. They are awaiting the return of their mother (Susanne Wuest), who has been in hospital recovering from plastic surgery which she has undergone following an accident. However the woman who arrives at the house claiming to be their mother is not the person they were expecting, and soon the boys realise that they must use every trick in the book if they are to uncover the true identity of this new stranger in their midst.

When analysed Goodnight Mommy (2014), the new chiller from Austria, is a film where very little actually happens. Twin brothers are alone at home, when a woman who may, or may not, be all she claims, suddenly arrives on their doorstep. They all act a bit off kilter, are suspicious of each other, and then spend most of the remaining film in what amounts to a game of cat and mouse between the three characters, as the boys try to outwit this possible stranger and vice versa, before a showdown with one of the most surprising twists seen in recent cinema. This rather simplistic storyline however, plays in its favour. Unlike an increasing amount of modern films whose makers seem to believe in giving heir viewers quantity over quality as well as convoluted storylines which loose you before the opening pre-credit sequence finishes, it’s to Goodnight Mommy’s credit that it holds the viewer’s attention to the end, with its relatively short running time of ninety nine minutes just right to sustain interest.

The film’s true delight though are real-life twins Lukas and Elias Schwarz, in this their debut feature. From the moment they are first seen playing innocently in the cornfield adjoining their idyllic lakeside home, until the nail-biting climax where it is eventually revealed whether their fears about their mother and her true identity are unfounded or not, they hold the screen with a presence seldom seen in actors so young or new to the profession. Much of this of course is down to the fact that they are playing in the film what they are in truth, twins. You can tell the bond these boys have is authentic – knowing glances between them, the pain one feels when the other suffers – to the extent you frequently forget you are watching fantasy and not an extension of the Schwarz’s in reality. Wuest as their mother is also a force to be reckoned with, suitably creepy in a psychotic manner as you the viewer, like the boys, try to decipher whether she is all she claims to be.

The only possible quibble with the film is that, at times, it feels in danger of verging on the clinical, both in atmosphere and in attention to detail during some particularly gruesome interludes: you will never look at a tube of superglue in the same way again after one cringingly nasty scene. Goodnight Mommy is an undeniably enjoyable and disturbing romp, cleverly put together, with a clipped dialogue thats sparseness simply magnifies the boy’s growing disquiet with a mother they feel they should know, but whom they soon discover may not be all she seems. However, like the house where the action plays out, everything – from characters to locations – seem slightly too remote to be truly believable, even though the situation, at a stretch, could happen.

As with so many good films at the moment – The Ones Below (2015) and last year’s FrightFest sleeper Road Games (2015) for instance – most original and truly unsettling fare comes from Europe and is not, strictly speaking, horror. Like Goodnight Mommy (2014), these thrillers are genuinely disturbing because they – though perhaps slightly farfetched in premise – are set in the real world, where the monsters are just like the people next door and their victims could quite as easily be you or me.