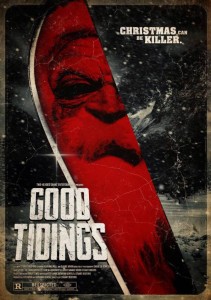 If you’re keen to watch a Christmas horror film which is not based around the myth of the Krampus, then maybe this one’s for you. Good Tidings sounds like something along the lines of Hobo With a Shotgun and follows a homeless man who must defend himself against some sinister santas. What’s Christmas without a bit of good old-fashioned exploitation cinema? Not much, that’s what.

Synopsis:
A homeless war veteran with a chequered past must rely on a side of himself once thought buried when he and his companions are targeted on Christmas Day by three vicious psychopaths in Santa suits.

Check out the teaser trailer and get a glimpse of some serious freaky Father Christmases. Good Tidings comes from director Stuart W. Bedford, the writer behind the upcoming film Apocalypse, which sees a mysterious virus bring the dead back to life.

Unfortunately, Good Tidings is not set for release until Christmas 2016. However, we all know how quickly time goes and it will be here before we know it.