Playing 2015 festivals under the title Shut-In before its more generic retitling, home-invasion horror Intruders finally has a release slated for the UK. 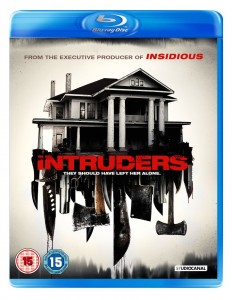 Set in the house of reclusive agorophobe Anna (Beth Riesgraf, exceptional), Intruders details what happens when three lowlifes break in, hoping for a straight-forward robbery. Anna’s agoraphobia is so acute that she cannot bring herself to flee the house, but that’s ok; she has plans for the trio, as well as a house rigged up for such an eventuality.

The feature debut of director Adam Schindler, Intruders has been nominated for a Golden Trailer Award for Best Horror, alongside big-hitters Crimson Peak, Sinister 2, The Conjuring 2 and The Witch. Check out the trailer below, cut by Outpost Media for Momentum Pictures. Intruders will be released on UK DVD, blu-ray and Digital HD on June 6th.