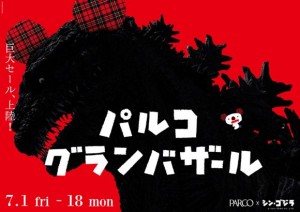 Keen for a bit of Japanese Godzilla-based weirdness this morning? Course you are. Here then, is the result of a cross-promotion between the upcoming reboot Godzilla: Resurgence and Japanese department store Parco.

Whilst we await our first glimpse of who (what) The King of the Monsters will be sparring with in Toho’s new film, this TV spot sees him facing a giant-sized version of Parco’s mascot, the Parcoala. It may resemble the corporate hell of The Simpsons’ Treehouse of Horror tale Attack of the 50-Foot Eyesores, but it’s a lot more fun than the shameless, endless Disney cross-promotional campaigns we routinely suffer on English-speaking TV.

Parco are holding a huge sales event in July, where a limited edition poster in which Godzilla is sporting the Parcoala’s trademark tartan ears will be onsale. 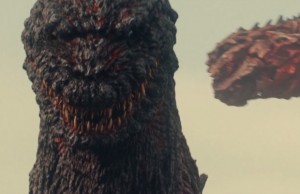 Co-directed by Hideaki Anno (Evangelion series) and Shinji Higuchi (Japan Sinks), Godzilla: Resurgence will hit Japanese screens on July 29th. It will be the 29th film in the long-running franchise.