2016 continues unabated on its murderous course, and for horror fans, the latest is a biggie. The sad, sad news came in on Monday of the passing of legendary splatter director Herschell Gordon Lewis, who was 87. 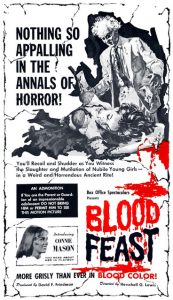 The ‘Godfather of Gore’ changed the course of horror cinema in 1963, unleashing upon the world its first ever gore movie, Blood Feast, and arguably creating the slasher narrative blueprint in the process. “Nothing so appalling in the annals of horror” had ever been seen before, and the film (perhaps inevitably) became a huge hit on the drive-in circuit.

Lewis made a string of low-rent/high-profit schlockfests in the years following Blood Feast, including 2000 Maniacs!, The Wizard of Gore, Color Me Blood Red and She-Devils on Wheels. His final film before returning to directing in 2002 with belated sequel Blood Feast 2: All U Can Eat was 1972’s gleefully offensive The Gore Gore Girls.

A single-mindedly driven entrepreneur and wheeler-dealer, Lewis remained fiercely hard-working until his final days, having ran any number of sketchy businesses in the ‘60s and ‘70s (he once served three years for fraud) and later, penned numerous books on marketing and money-making. 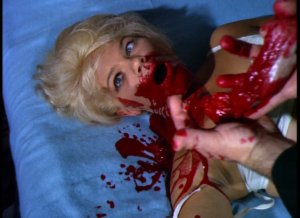 Lewis opened a floodgate (bloodgate?) with Blood Feast and its follow-ups, and his influence runs through all of cinema’s more lurid avenues. A shrewd genius, a cinematic outlaw and a true original, Herschell Gordon Lewis will not be soon forgotten. Our condolences here at Scream go out to his family and loved ones, and our sincerest gratitude to the man himself.