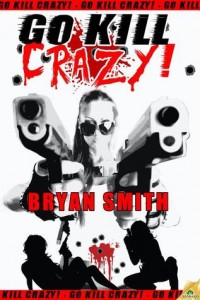 If Quentin Taratino decided to pen his take on Charlie’s Angels laden with blood, brutality and some of the most psychopathic, take no prisoners, female characters you’re ever likely to meet, Go Kill Crazy would be the end result. The story is about three female protagonists Lana, Desiree and Echo, they are tattooed strippers, hard as nails and we learn what turned each of these lascivious girls into hardened killers, enacting the odd bit of torture, taking copious amounts of drugs and alcohol, and generally living a fast life outside of the law.

They get involved in drug running, arms dealing and life’s a riot until Echo attempts to gain closure on some unfinished business, that being the life of the ex-boyfriend who stupidly cheated on her and plunged her headfirst into this life of crime and debauchery.

Add into the mix a conman turned cult leader with visions of a merciless and violent end for as many people as possible, the ex-boyfriend determined to rescue his sister from the grasp of The Order of Wandering Souls and you have all the ingredients for a thrilling anarchic and turbulent ride.

Not for the faint hearted, there’s extreme violence, blade through scrotum type torture and some disturbing yet funny dialogue, hell this book has it all, I’ll finish with an example of some wanton violence as Echo shoots and kills an old lady driving past.

‘Dez cocked an eyebrow at Echo as she returned from the Corvette. “The fuck was that about?”

“Little old lady flipped me off back down the road”.

As if that made perfect sense.

This is a high octane, intensely addictive read that feels like and deserves to be made into a movie, it’s sexy, violent and totally liberating. And a brilliantly fun and brutal read, it won’t win any prizes but it’s not about that, just bloody entertaining.