“When you turn on the lights, the dark things just hide behind the chairs and under the bed frame. They don’t really go away.” The profound words pertain to recovering drug addict Rain Thomas, the protagonist of Jonathan Maberry’s novel Glimpse. Maberry penetrates Rain’s psyche with the precision of a skilled surgeon, locating the emotional equivalent of internal bleeding.

It would be an understatement to call Rain a “damaged” person. Ten years ago, at the age of 16, she gave up her baby for adoption. The infant’s father had perished while in the military. Rain also feels guilt for her own birth which, because of difficulties during labour, rendered her mother incapable of resuming a promising career in ballet. Though clean for three years, Rain experiences dreams and visions that would be considered hallucinatory. They involve a malevolent being known as Doctor Nine, a truly nasty piece of work: “He leaned his mouth against her ear, and his breath was like the fetid breeze from an open crypt. He smelled of things that rotted but did not want to die. His tongue, wrinkled and clammy as a worm, licked a slow, wet line along the outer edge of her ear, tracing its shape.”

Doctor Nine is torment personified; he gets his jollies through the misery of others. His torturing extends into Rain’s circle of Narcotics Anonymous friends, but focuses on Rain and Dylan, the son she only glimpsed shortly after his birth. The evil doctor can manipulate time as well as turning the screws on people’s fears. With each tweak of his victims’ fragilities he gains more access to crossing over from a supernatural netherworld into a permanent residence in the real world. 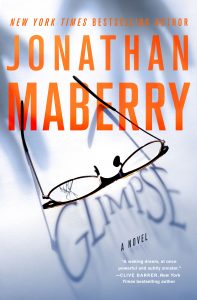 Reality is a nebulous term for Rain and her recovering comrades. Their addictions were largely based on wanting to escape from the harsh cruelties of life. When surrealistic events intrude upon their consciousness, they choose not to discuss what they perceive as unreal. Rain’s admission to interactions with Doctor Nine unleashes a torrent of relief among the group at not being alone–as well as an acknowledgement of their collective fear.

Fear is conjured up brilliantly by author Maberry. The atmosphere he creates is bizarre yet weirdly accessible. Inanimate objects such as a fractured pair of eyeglasses and pocket watches that are missing wind-up keys factor into the freakish narrative. Maberry’s characters are haunting, in the various meanings of the adjective. Glimpse is a splendid book that exposes that there is more than meets the eye; espying what is lurking in the shadows and in the hidden recesses of our minds.