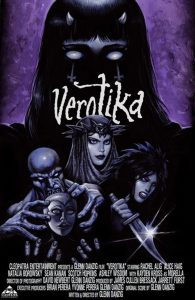 Misfits founder Glenn Danzig’s new anthology horror film Verotika shot to instant notoriety when it premiered at the Cinepocalypse film festival recently. And you’ll soon be able to find out what the hype is all about, because the flick is coming to VOD on Halloween.

Labeled “batshit insane” by Blumhouse exec Ryan Turek, Verotika was a long-time passion project for Danzig. Based on three stories from his comic imprint of the same name, the film has been described by numerous critics as a kind of accidental comedy in the vein of Tommy Wisseau’s The Room.

Cleopatra Entertainment will release Verotika on VOD on October 31st, with limited screenings in cities like New York, San Francisco, and Austin in the weeks prior.