Should Gizmo Die in Gremlins 3? 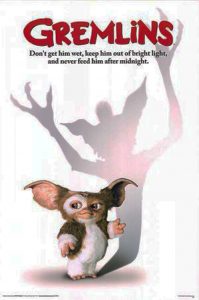 “Gremlins 3?!” you ask. Yep! Chris Columbus has reportedly wrapped writing the script for the long-awaited sequel Gremlins 3 and he poses a heart-breaking question: Should Gizmo be killed for the good of humanity?

/Film asked this question to Columbus and he replied with: “Very good observation. That comes up in the movie, certainly.” As feeding Gizmo after midnight and getting him wet leads to the creation of the demonic gremlins, it only seems right that he should be eliminated to stop the terror once and for all.

Columbus agrees: “I think it probably is a good idea to be honest with you. Too many people are dying.” Oh, no! Not only would this put an end to Gremlins as we know it, it would be heart-breaking!

Should Gizmo be punished for the humans’ inability to follow instructions? We say: NO! Justice for Gizmo.

When speaking further about Gremlins 3, Columbus described how the script takes us back to the twisted sensibility of the first film: “It is as twisted and dark as anything. […] I wanted to go back to the really twisted sensibility of the first movie. I found that was a very easy place for me to fall back into and start writing again so hopefully we’ll see that movie soon.”

Killing Gizmo would be the darkest move of the franchise, but if Joe Dante returned to direct Gizmo 3 would he approve of murdering the adorable – and iconic – creature?