THE GIRL IN THE BASEMENT: Book Review 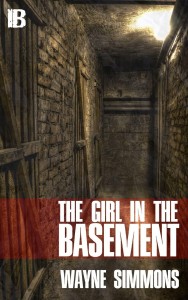 Kayley Sands commits the cardinal sin of late night revelry on the late night bus home after a gig, lulled by the comfortable back seat and droning vibration of the engine she dozes and dreams of home. Then, bit of a shock to say the least, she wakes disconcerted, someplace she really shouldn’t be then a cloth is placed over her nose and mouth, and her eyes roll back into her head.

If you’ve spent time as a student this could well bring back fond disjointed memories of drunken times, waking up in unexpected places, hell it’s part of growing up but chances are there won’t be fond memories of being abducted by a psycho. There’s a solid degree of realism to these events, you can imagine it happening and the author provides a protagonist that you can’t help but be fully invested in. Haunting flashbacks, a desperate fight for survival, things hidden deep in the past, plenty of tears and screams all make for a powerful novella that feels bigger than its sixty odd pages.