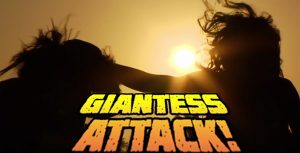 Now here’s the kind of superhero movie we could do with more of. Two supersized babes in shiny 60s sci-fi gear level Hollywood Godzilla style in this irresistibly insane trailer for nutbags trashfest Giantess Attack.

The film comes from contemporary B-movie maestro Jeff Leroy, who previously unleashed upon the world the likes of caged-women monster movie Werewolf in a Women’s Prison, the Russ Meyer-esque Rat Scratch Fever and schlocky killer spider flick Creepies. It stars Rat Scratch Fever’s Tasha Tacosa and Rachel Riley (not that one, Countdown fans) as two unemployable actors who are constantly at each other’s throats. Visited one day by space fairy twins (played by Christine Nguyen), the pair are given superhuman powers, and decide to take out their rage on the city that shunned them.

Like a 60s sci-fi glamour take on Godzilla by way of Attack of the 50ft Woman, Giantess Attack avoids the bad CGI whitewash of silly SyFy channel cheapos in favour of crushable model buildings for our towering heroines to flatten. And going by this trailer, it’s all the better for it.

Giantess Attack will be unleashed sometime in 2017.