A Giant Wave Descends in the Poster for Geostorm 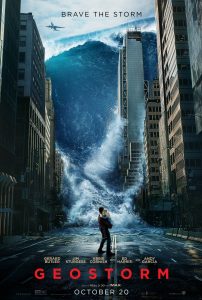 I do love me a good disaster film and Geostorm looks like it’s going to tickle my fancy. A new poster has been revealed and it teases a pretty huge wave descending on the city. As with all great – and cheesy – disaster flicks, a young family are stuck in the middle of it all.

Synopsis:
After an unprecedented series of natural disasters threatened the planet, the world’s leaders came together to create an intricate network of satellites to control the global climate and keep everyone safe. But now, something has gone wrong—the system built to protect the Earth is attacking it, and it’s a race against the clock to uncover the real threat before a worldwide geostorm wipes out everything…and everyone along with it.

We weren’t very impressed when we saw the trailer for Geostorm earlier this year, but my love for features that show the weather wreaking havoc means I’ll be in-line to see this one later this year. Remind yourself of the horror show in the trailer below.

Geostorm stars Gerard Butler, Andy Garcia, Jim Sturgess, Abbie Cornish, Alexandra Maria Lara, Ed Haris and Daniel Wu. Be sure to check out Geostorm when it is released in a surprisingly fitting spot this Halloween on 20th October.