Synopsis:
Three science academics (played by Melissa McCarthy, Kristen Wiig and Kate McKinnon) find themselves out of work, after the superiors at their colleges are less than impressed with the women’s claims in the existence of the supernatural. However, after discovering that there are indeed ghosts haunting Manhattan, the trio join forces with a feisty subway worker (Leslie Jones) and their new male receptionist (Chris Hemsworth), before setting out to clear the Big Apple of some seriously big trouble. 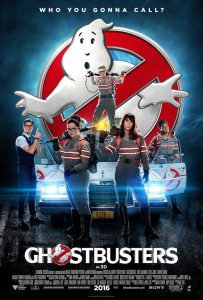 One of the arguments which filmmakers fire off when trying to defend reboots of classics, is that they’ve done it in an effort to make past successes more relevant to today’s audiences. Hence director Paul Feig – in his 2016 take on the classic 1984 comedy fantasy Ghostbusters – has made the ghoul chasing quartet at its centre (played originally by Dan Ackroyd, Bill Murray, Harold Ramis and Ernie Hudson) change gender, whilst the hot totty previously represented by Sigourney Weaver, is now transformed into the muscle ripped Chris Hemsworth (who plays the girl’s wonderfully dense secretary). Numerous other homages to the 1984 cult movie are fortunately, for the most part, done cleverly enough not to grate on the nerves of purists: segments like the huge carnival parade through the streets of Manhattan which introduces us to the monstrous ‘Stay Puft Marshmallow Man’ are there, albeit it with a few new tweaks to freshen them up. There are also references to other classic horror and fantasy films which those with a sharp ear will pick up on, including a nifty little nod towards The Wizard of Oz (1939), and the potential of a thrilling Michael Jackson tribute, though this unfortunately isn’t expanded upon.

There are two major problems with the film however. First it just isn’t scary enough. Admittedly Ghostbusters has never been referred to as a straight horror film – more comedy sci-fi with creepy overtones. By its very nature however – it involves ghosts after all – surely it warrants something more chilling? Watched even now the 1984 version has an undeniable air of sinister unease, along with those disturbingly kitschy undercurrents which coloured so many films from that era. In the new version the opening scenario set in a ‘haunted’ historical house museum in Upper Manhattan is actually quite effective – enough to make a child at the screening I attended cry. However any initial hopes for something more macabre are quickly dashed, as the action soon settles into a comfortable mash-up of Scooby Doo frights and CGI trickery which, though amusing, are unlikely to raise much more than a mild chill. Secondly the film fails, overall, to keep the momentum up for the duration of its two hour running time. After the initially promising opening things go downhill quickly and – apart from the occasional blip, like the segment set within a rock concert with a cameo appearance from the god of ghouls himself Ozzy Osbourne – it all becomes a bit of a drag, before fizzling out completely in what can only be described as a damp squib finale: again the potential is there, but in the end it feels wasted with a sense of everything being rushed.

On the positive side there are some marvellous performances from the film’s cast – unfortunately just not from its main stars. There’s nothing wrong with McCarthy, Wiig, McKinnon and Jones, but you can’t help feeling that – for much of the time on screen – they act like they’re running through a stand-up comedy routine, each setting up jokes for the other three to knock down. And Hemsworth? As mentioned before his main role seems merely to look buff whilst flexing his enviable six-pack – the beauty of which is alluded to on more than one occasion. The real stars of the show here are actually those of the original film, most of whom make an appearance (some longer than others) at various points during the proceedings: stay until the end credits for a fleeting treat by the wonderful Ms Weaver, which is worth the admission price just on its own. 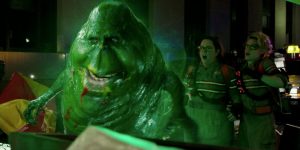 For younger audience members who don’t know the original spook fest, this mad mix of slightly risqué humour and supernatural foolery will doubtless amuse for its two hour running time. For those though who remember the phantom busting quartet the first time round, this reboot doesn’t stand the ghost of a chance.