Ghostbusters Cross-Over to Feature Everyone! 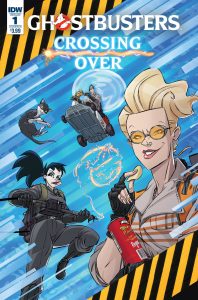 We all know the old adage: when you have a ghostly infestation of unparalleled proportion there is only one company qualified for the job of exterminating them, The Ghostbusters. You don’t have to be afraid of no ghosts when these professionals are on the job!

Ghostbusters have been one of the biggest selling franchise in the past thirty years and have been manned by a number of different teams, most famously the original team and the re-launched All New Ghostbusters team. But did you know there are way more teams than that? At least five or six! Well, IDW sure knew and this March, the company will be launching a cross-over mini-series titled Ghostbusters: Crossing Over which will feature every team from the worlds of animation, movies, and video games. And we mean EVERYONE! Writer Erik Burnham officially states:

“This story has something for everyone who has ever loved an iteration of the Ghostbusters. The Prime team from the original movies? There. The Real Ghostbusters? Present. The Extreme team? Accounted for. Not to mention the characters from the video games, the 2016 movie, and the originals we’ve created for the comics! If you don’t like one character, don’t worry, we have others! BUNCHES of others.”

So how exactly are all these different teams going to meet up with each other? As per cannon, the original Ghostbusters have had access to an inter-dimensional portal that gave them access to cross-dimensional paranormal research and a way to contact other teams in the multi-verse. When that same portal releases the contents of the Ghostbusters Containment Unit, it’ll take everyone’s expertise to get them back in there. But it’s not all fun and games for the artist Dan Schoening, who faces some artistic challenges ahead of him. 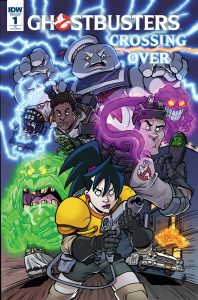 “The biggest challenges from an artistic perspective is emulating the styles of the Real Ghostbusters, Extreme Ghostbusters, Sanctum of Slime and any other teams that may pop up,” said Schoening. “Not only do we want to honour the distinct look of the characters, but also the backgrounds and ghouls. Luckily and gratefully, we have already had a chance to play with many of those characters in previous books.”

So may all you purist rest your worried heads, it looks like the best of the best is up for the job! Keep an eye out for Ghostbusters: Crossing Over #1 early next year!