I’m more than a little bit in love with these four posters for Ghost Stories, the film based on Andy Nyman and Jeremy Dyson’s hit stage play of the same name. The colour-drenched, surrealist pieces were unveiled ahead of the film’s SXSW premiere and big screen release. 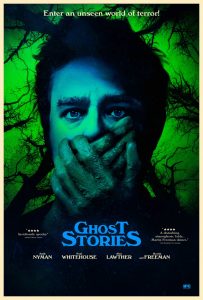 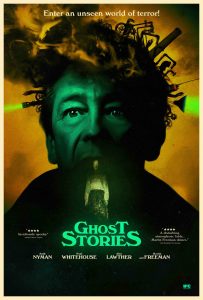 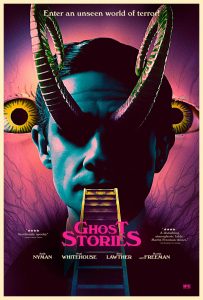 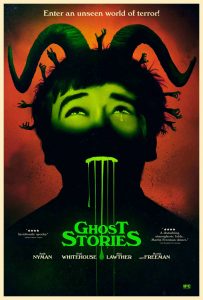 In the film, Nyman reprises his role from the Olivier-nominated play, playing psychologist and skeptic Professor Goodman, who has his beliefs tested when he stumbles across three files detailing real-life hauntings. Also starring are Martin Freeman, Alex Lawther and Brit comedy veteran Paul Whitehouse. Nyman and Dyson co-directed the film from their own script.

Synopsis:
Phillip Goodman, professor of psychology, arch-skeptic, the one-man ‘belief buster’ – has his rationality tested to the hilt when he receives a letter apparently from beyond the grave. His mentor Charles Cameron, the ‘original’ TV parapsychologist went missing fifteen years before, presumed dead and yet now he writes to Goodman saying that the pair must meet. Cameron, it seems, is still very much alive. And he needs Goodman to find a rational explanation for three stories that have shaken Cameron to his core. As Goodman investigates, he meets three haunted people, each with a tale more frightening, uncanny and inexplicable than the last.

Ghost Stories comes to UK cinemas on April 13th from Lionsgate, while IFC Midnight will release it a week later in the US, on April 20th.