Ghost-Romance Lace Crater to be Released by Invincible

You may remember that we reported a trailer for the supernatural body horror Lace Crater last year and if you do, your memory is better than ours. Lace Crater has a fascinating concept, but since last year’s teaser trailer it vanished from our minds. Well, it’s now back and preparing for a limited VOD release courtesy of Invincible that plan to release it exclusively on FlixFling on 29th July. 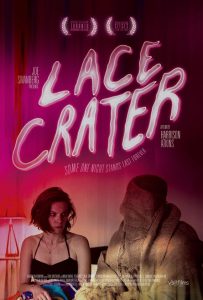 All Ruth wanted was to get away for the weekend. Escaping to the Hamptons with friends after a bad breakup, she finds an unexpected connection with Michael, a stranger who shows up in her room one boozy night. They have great chemistry, and she finds herself inexplicably drawn to him. There’s only one problem: Michael’s a ghost, and a one night stand with him leaves Ruth with aftereffects that can only be described as supernatural. As she suffers through mucous-laden night sweats, glitchy hallucinations, and the occasional tar-black ooze, her friends become too disgusted to support her. Ruth must figure out for herself if she can reintegrate into society – or if she even wants to.

Yep, it’s the film about a woman who has a fling with a ghost and if that doesn’t immediately grasp your attention then you’ve come to the wrong place, because we can’t wait to check it out. Lace Crater will be released theatrically in New York City on 29th July and Los Angeles on 5th August, so American readers, what are you waiting for? The film should receive a national rollout soon after.