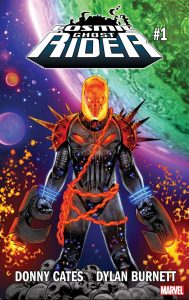 The Ghost Rider mantel has been handled by a number of characters over the years. While the most well-known is the Nicholas Cage toting Johnny Blaze, much like Galactus’s herald, The Spirit of Vengeance can be a part of anyone as long as they’re willing to trade their soul to Mephisto for a chance at revenge. Which, of course, is exactly what the ultimate gun-toting bad-ass, The Punisher does. But, the fun doesn’t just end there. The Punisher/Ghost Rider is not only empowered with the power of revenge and a sweet-ass bike, but he also gets to travel space! Throw in a Thanos-lead, alternate future and you got yourself one of the most anticipated comics of 2018.

Cosmic Ghost Rider, which will be hitting shelves July 4th, will be picking up where the current Thanos leaves off, that is between when Castle’s Ghost Rider arrival and the millennia before he gets crushed by Thor’s hammer. The official origin story states that after Thanos arrives and destroys all of Earth, the Punisher makes one last wish to get revenge on that “purple sonofabitch.” Hearing his please, Mephisto offers him the mantel of Ghost Rider, though unfortunately for him, there’s no one left to punish, after all, the Earth is dead. After years of riding the barren planet by himself, Galactus stumbles onto Earth and asks Castle for his help in defeating Thanos, to which Castle agrees, hence Cosmic Ghost Rider. Though Galactus doesn’t survive the encounter with Thanos, Castle was now free to delve out beatings all across the universe.

While perhaps one of the strangest origin stories to cross Marvel’s desk, fans have been going wild for the new character, which allowed for Cosmic Ghost Rider’s creative team to go as wild on the series as they felt appropriate. Marvel’s official statement had this to say about the new work and the team behind it, Donny Cates and Dylan Burnett: 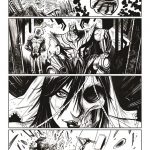 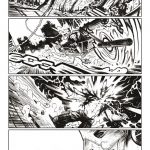 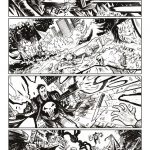 “He’s commanded the page in a blaze of glory…and now, this July, he’ll embark on his own solo adventure in COSMIC GHOST RIDER, an all-new limited series written by the character’s co-creator Donny Cates (Thanos, Doctor Strange) with art by one of the industry’s hottest new creators, Dylan Burnett! The alternate future version of Frank Castle has become a fan-favorite since debuting in THANOS #13, stealing the spotlight with his crazy antics and unique origin story – and in this story, Cates and Burnett promise to pull out all the stops as Cosmic Ghost Rider’s plans for a better universe come to fruition…however crazy they may be.”

Though there isn’t much detail on the story, Marvel has released artwork to accompany the announcement, hinting an auspicious and wild start to the new character.