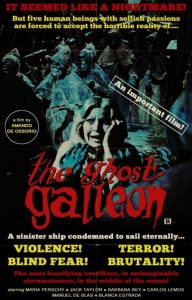 Two young fashion models go missing while performing a publicity stunt in the middle of the ocean. A search party is formed, comprising of the some of the staff at the modeling agency, a scientist, and a friend of one of the missing girls. They soon find themselves aboard a mysterious ship once belonging to the Knights Templar, who now haunt the vessel as spectral beings.

In the early 1970’s, Spanish director Armando De Ossorio unleashed a brand new form of terror on the unsuspecting public—one that’s been seldom duplicated since. He found his muse in the knights Templar, an extinct religious order, who to this day remain shrouded in mystery and speculation. Once praised as heroes of the crusades, they were persecuted by The Spanish Inquisition, deemed heretics, and many were burned alive at the stake. Rumors and suspicion of devil worship and forbidden rituals have persisted for centuries, and the order remains one of the most intriguing subjects in European history.

De Ossorio resurrected the knights from the grave, along with the infamy and old tales that accompanied them. The end result was a quartet of films known as the Blind Dead series. They’re one of the best combinations of folklore and atmosphere ever put to celluloid, successfully tapping into the superstition held within the minds of the European film audience. The images of the Templars rising from their crypts, moving along the countryside like ghosts are some of the best remembered images in horror.

With their ash colored robes, skeletal appearance, and being led by sound and not by sight—these specters still retain their ability to captivate us. It’s been decades since these films first appeared on the screen, and the ability to maintain their legacy after all these years is nothing short of remarkable.

However, every successful franchise has a low point. For every triumph, there’s a tragedy; such is the case with the third entry in the series: The Ghost Galleon. Much like the ship that the story takes place on, this film is a fish out of water, and empty like the haul of a sunken vessel. It lacks many of the qualities that the other films thrived upon, and has the appearance of being hastily cobbled together. It’s an attempt to recapture many of the same elements from the previous entries, and utilize them in different location, this time on the high seas. Whatever potential it might have had to be a unique entry was greatly squandered. Needless to say, it falls well short of the mark of being anything memorable or remarkable.

The most noticeable problem throughout this endeavor is its poor pacing. The other films were a slow burn, and gradually built themselves up, resulting in an atmosphere as thick as a morning fog. Ghost Galleon has a story that’s rushed, uninteresting, and lacking in any intrigue or captivation. Completely devoid of any solid focus, it jumps around too often, and a lot of sequences feel like they’re either dragged along for far too long, or pass by too quickly. We’re forced to endure a pointless flashback, and a cast who bear more of a resemblance to a pack of ghost hunters from a Saturday morning cartoon. The characters we’re introduced to are merely carbon copies of stereotypical horror clichés, and are just as uninteresting as the story that they’re involved with.

If there’s one redeeming quality to be found within this convoluted mess, it’s the Templars themselves. Despite being a part of such a tawdry and awkward vehicle, the blind dead still look mystifying, and invoke thoughts of fear and dread. With so much lacking in Ghost Galleon, they’re a saving grace, as well as the one atmospheric element that weaves its way into the story. There are some great scenes of them awakening from their coffins on board the ship, (a la Count Orlok in Nosferatu) and they provide the film with a finale that makes the insufferable 90 minutes worthwhile. As great as they are however, they’re not enough to salvage this wreck from Davey Jones’ locker. 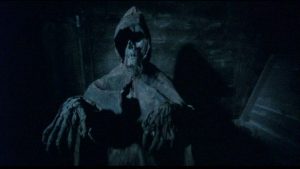 Luckily, De Ossorio would resurrect the blind dead for one final foray the following year in The Night Of The Seagulls. It would not only be a return to form, but a fitting conclusion to the classic series.