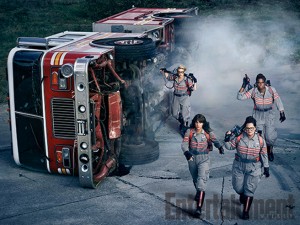 In an interview with Entertainment Weekly it was recently announced what type of ghosts the Ghostbusters will be busting and they are set to include, “Pilgrims, old-timey sailors, Revolutionary War spirits, and even a couple of zoot-suited gangsters”.

That’s a lot of ghosts from New York’s past, so the women are definitely going to have their work cut out for them. As the film looks to delve in to America’s past, we hope that audiences will be able to put the old Ghostbusters safely behind them, and appreciate that it is time for a new era for the ghost-busting franchise.

In a new image from the film, which you can check out below, we can see that the lady Ghostbusters are suited and booted as they strut away from an upturned fire engine. Maybe there will be some ghostly firefighters in there, too.

With a strong cast that includes Melissa McCarthy, Kristen Wiig, Chris Hemsworth, as well as old-timers Bill Murray, Sigourney Weaver and Dan Aykroyd, Ghostbusters comes from director Paul Feig (Bridesmaids, The Heat) and will be arriving in cinemas on 15th July in both the USA and the UK.