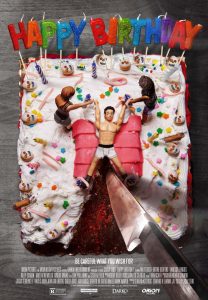 Getting wasted in Mexico turns out to be a really bad idea for two American friends in Casey Tebo’s torture thriller Happy Birthday. Ahead of the flick’s September release comes this trailer and quite brilliant poster.

On his birthday, Brady finds out his girlfriend has been cheating on him. His best friend Tommy decides to take him on a raging drug induced birthday celebration in Mexico to forget his troubles. Things quickly take a dark turn when the two girls they meet at a bar are connected to a Mexican drug cartel and hold them for ransom. Drugged and tortured, Brady and Tommy now must fight for their lives and find a way to escape a desolate hotel room nightmare in a foreign land.

Known for his rock docs, writer/director Tebo has filmed Aerosmith’s Steven Tyler more than once, although Happy Birthday marks the first time he has directed the rock legend in an acting capacity. Tyler appears in a cast led by Matt Bush (Halloween II, Piranha 3DD) and Riley Litman (Sun Choke) as the two doomed friends.

Happy Birthday hits cinemas in the US on Spetember 9th. And it’s gonna be brutal.