Get to Know the Legend of Krampus in a New Featurette 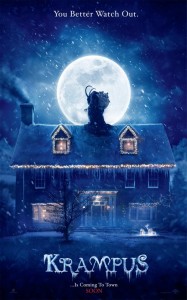 If you’ve been wondering what on earth this Krampus creature is all about, then then this feature from Universal should help you get to grips with the mythological being. In short, Krampus doesn’t like naughty folk, so if you want to avoid a visit from him then you better be nice. We can’t think of anything more frightening – or hilarious, frankly – than being hit with branches, put in a bag and then dragged to hell.

Universal will bring the Krampus to the big screen next month in their horror-comedy feature that stars Allison Tolman, Adam Scott, Toni Collette, David Koechner and Conchata Farrell. Early reactions from the film have been positive, so if you’re after some alternative Christmas cheer this year, then Krampus may be the film for you.

Synopsis:
When his dysfunctional family clashes over the holidays, young Max (Emjay Anthony) is disillusioned and turns his back on Christmas. Little does he know this lack of festive spirit has unleashed the wrath of Krampus: a demonic force of ancient evil intent on punishing non-believers.

Krampus will be released on 4th December 2015 in both the UK and USA.