Get Snap-Happy Again with Piranha JPN

Probably best to just assume it’ll never be safe to go back in the water, as it seems that, six years since Piranha 3DD, those flesh-hungry fishies are swimming back to the screen once again. 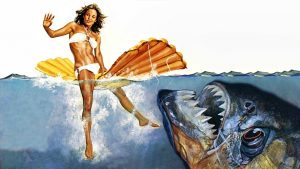 As recently announced on IXFilm Group’s website, the company is developing Piranha JPN: Summer of the Piranha. While very little is known about the project, we do know that it is a Japanese production and, going by the title, will presumably take place in the Land of the Rising Sun. Additionally, the film will be produced by Hisako Tsukuba who, under the name Chako van Leeuwen, has produced every Piranha film since Joe Dante’s original 1978 classic, including the lesser-seen 1995 remake.

The film currently has a tentative 2018 release date. Hopefully we can bring you some more morsels on this one soon.