Get Infected by this Trailer for Virus: Extreme Contamination 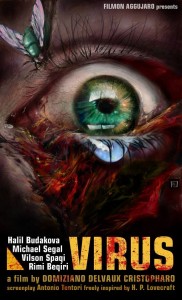 A word of warning: this trailer is as extreme as the title would suggest. It’s certainly not the time to watch it if you’re sitting down to dinner and I wouldn’t recommend you show it to your kids. In short, it’s freaking awesome. If you love blood, guts, gore and more, then you’re in for treat because this trailer has it all.

This infection is, to say the least, grisly as the hell it has crawled up from. Moments in, the trailer had us covering our eyes, so we can’t imagine what the rest of the film is like. Check it out below, if you think you’re brave enough.

Synopsis:
An Italian scientist moves to Kosovo to study the impact of a meteorite that is the cause of some strange events. Once there, he discovers that the object has been moved in a nearby military base where all the people were turned into dangerous weird creatures.

Virus: Extreme Contamination is based on the short story by H.P. Lovecraft titled The Colour Out of Space and has been directed by Domiziano Cristopharo, who has plenty of other gory delights for you to feast your eyes on if you like the look of this one.