Get Cooties in the new Red-band Clip 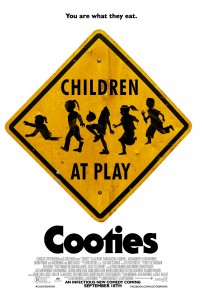 A new clip has been released for the shamelessly hilarious and terrifying Cooties, giving us a taste of our band of teachers taking down a zombie child. The clip shows a helpless Elijah Wood on his back as a relentless undead youngster stops at nothing to gnaw on his face. Even from this short clip it’s clear to see that the strong cast of actors – which further includes Leigh Whannel, Alison Pill and Jack McBrayer – are the glue that holds this film together. Their brief dialogue exchanges pin-point the comedy we are to expect; an openly unforgiving onslaught of ridiculousness and insanity. I’m most certainly in.

Check out the thoroughly entertaining clip below and catch Cooties when it is released on VOD on 18th September 2015, just in time for the new academic year. Nicely done.