What kind of fucking world are we living in where the man who invented horror’s most thriving sub-genre cannot get funding to work within it?

Yes, it’s nuts, but that’s the position legendary director George A. Romero finds himself in. Romero single-handedly created the lumbering, cannibalistic zombies we know today with his horror benchmark Night of the Living Dead in 1968, but you don’t need me to tell you that. No longer the reserve of the horror geek, Zombies have now become unlikely, quasi-folk heroes for children and ‘straight’ folk alike, as well as those with little to no interest in the wider horror genre. They also mean big bucks, thanks mainly to the likes of the phenomenally successful The Walking Dead.

In a recent interview the Godfather of zombie cinema offered some characteristically pithy comments on what the big budget given to him for 2005’s Land of the Dead meant, and the floodgates that were opened for the genre.

“I did Land of the Dead, which was the biggest zombie film I had ever made,” Romero said. “I don’t think it needed to be that big. That money went largely to the cast. They were great, but I don’t think that money needed to be spent. Dennis Hopper’s cigar budget cost more than the entire production of Night of the Living Dead. That’s the way it is.” 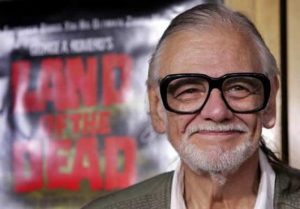 Lamenting the situation he now finds himself in, Romero continued:
“Now, because of World War Z and The Walking Dead, I can’t pitch a modest little zombie film, which is meant to be socio-political. I used to be able to pitch them on the basis of the zombie action, and I could hide the message inside that. Now, you can’t. The moment you mention the word zombie, it’s got to be, ‘Hey, Brad Pitt paid $400 million to do that.’”

While 2009’s Survival of the Dead is, for me, the strongest of Romero’s 21st Century zombie output as well as the closest to his first three Dead films, it was something of a commercial failure. Thus, despite having clear plans for his next Dead film, one of horror’s true heroes has been unable to make it happen.

“In 2007, Diary of the Dead all of a sudden made money. I was blind-sighted by that. One of the producers said, ‘Let’s make another one quick.’ I didn’t know what else I could talk about,” Romero said. “Diary of the Dead talked about how social media is haunting us today. I didn’t have anything else to talk about. So I decided to go back to the original premise of misunderstanding and people not being able to see each other’s point of view. I said I’ll do this one as a western and the next one as a noir. So did the western, nobody liked it, and the other one fell away. Then, all of a sudden, here came The Walking Dead. So you couldn’t make a zombie film that had any sort of substance. It had to be a zombie film with just zombies wreaking havoc. That’s not what I’m about.”

So there you have it. A pioneering and celebrated director unable to work within the genre he invented. It’s wrong, I tells ya. Dead wrong.