Geena Davis in First Image from Fox’s The Exorcist

Fox have released the very first image from their upcoming The Exorcist series, and it gives us our first look at Geena Davis as Angela Rance, whose daughter has a touch of the old demonic possession. 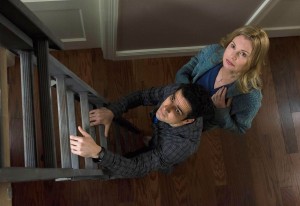 Fox ordered a pilot back in January, and have only very recently announced a full series for the show, which is a present-day reimagining of William Peter Blatty’s novel. This still comes hot on the heels of that announcement, so hopefully we can expect to see more teases coming in soon.

Geena Davis (The Fly, Beetlejuice) plays the mother of Charlotte who is, if you like, the equivalent of Linda Blair’s Regan in William Friedkin’s 1973 film, and is played by Scream Queens’ Brianne Howey. This first pic also shows Alfonso Herrera, as Father Tomas Ortega, and hints at something creepy going on in the attic. Is that where Charlotte takes up residence following her possession? We’ll find out when the show airs later this year.

More than four decades after the Academy Award-nominated film solidified itself as the greatest horror movie ever made, The Exorcist returns in series format as a propulsive psychological thriller following two very different priests tackling one family’s case of horrifying demonic possession.