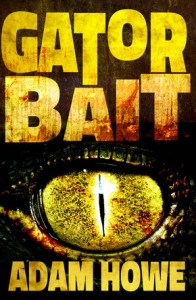 ‘A fly buzzed around his open, largely toothless mouth; drool dangled from his bottom lip like a limp lasso.’

A typical customer at The Grinnin’ Gator.

Gator Bait is a novella by Adam Howe set in the Louisiana swamp and The Grinnin’ Gator, a saw dust on the floor type bar with dirty booze, strippers and dodgy music. A place where you watch your step unless you want to end up as both lunch and desert for the big mouthed occupant of the water that this friendly bar sits over.

John Smith or Mr Hammond in a previous life is a top quality piano player, or he was right up until a jealous husband chopped off two of his fingers with a cigar cutter. Now he’s on the run because said husband is dead and unfortunately he ends up at The Grinnin’ Gator, where there’s a one legged owner called Horace Croker. One leg because George the gator took it for a snack and he’s now the avenue for any trouble via a push from the patio or worst case, the hidden trapdoor.

So we have Johnny Smith now playing piano minus two fingers, Croker the boss, his beautiful wife Grace, who’s a dreadful tease it has to said and big old George, always hungry, big teeth.

‘She started backing from the room— but as she pulled the door closed she shot me another glance that shivered down my spine like footsteps on the grave.’

A wicked tale of dirty swamp noir, degenerate skank infested, sweat ridden, mosquito riddled dump of amoral intemperance. Where everyone’s got an angle to play and the twists don’t always go the way you expect. The only question? Who’s gonna get fucked.