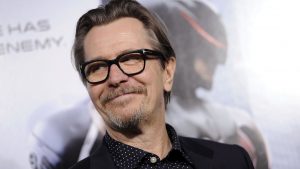 Having contributed to the world of horror with their adaptations of video game Dead Rising, streaming service Sony Crackle are serving up more blood ‘n’ gore with serial killer series The Butcher.

The series is being produced by Oscar nominee Gary Oldman (pictured) and The Social Network’s Douglas Urbanski, through their Flying Studio Pictures label. It was written by Columbus Day writer/director Charles Burmeister.

As reported by Deadline:
“The Butcher is a modern story of one man’s epic investigation to find, hunt down, and kill a serial killer who lives among us — someone who is very human, but also beyond human. Along the way the story’s hero, a hardened Los Angeles homicide detective named Mitch Dixon, must uncover the mystery of who The Butcher is, how he operates, and come to terms with the unbelievable truth — that he has discovered the key to immortality, the price of which is consuming human flesh.”

“We are incredibly pleased to be working with the wonderful creative team at Crackle on this unusual and hopefully gripping and creepy show as part of our effort to expand our creative energies beyond motion pictures and into the land of streaming television,” Oldman and Urbanski said in a statement.