I know who I’d be voting for in the US election; Ash, of course! This new image from Ash Vs Evil Dead gets patriotic as Ash and his crew stand in front of a waving American flag, urging viewers in the US to vote wisely, but also reminding us who we should really be worshipping.

Synopsis:
The second season roars back into action with Ash leaving his beloved Jacksonville and returning to his hometown of Elk Grove. There, he confronts Ruby. The former enemies have to form an uneasy alliance as Elk Grove soon becomes the nucleus of evil. 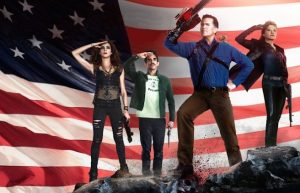