Last month, we told you that popular toy brand Funko was immortalizing Stephen King with two POP! vinyl figurines. Well, they’re not done yet. As part of their new wave of IT: Chapter Two POP! Toys, Funko are also creating a figurine commemorating King’s memorable cameo as a shopkeeper in the film. 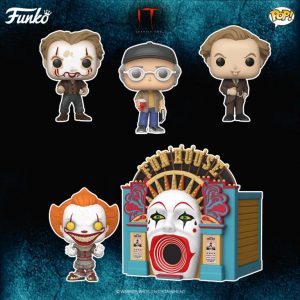 The wave also includes a toy depicting Pennywise without makeup, and one of It mid-meltdown with half the makeup wiped (or should that be ripped?) off Its face. There’s also a demonic version of Pennywise that comes with a pretty sweet funhouse.

All four toys are currently listed as “Coming Soon” on Funko’s website.