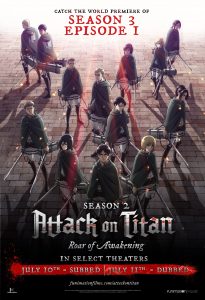 Funimation will present the Attack on Titan season 2 movie ‘Roar of Awakening’ and the first episode of the upcoming season 3 in a special event this summer. Roar of Awakening will recap season 2, so this is the perfect opportunity for fans to refresh their memories of season 2 and also get a sneak peak of the new season.

Attack on Titan showcases a brilliant blend of melodrama and hard-hitting horror. The series follows a world set 2000 years in the future where humans are on the brink of extinction thanks to Titans: giants that devour humans for pleasure. It is up to a young boy called Eren, his foster sister Mikasa and their team of soldiers to protect and defend a small town of survivors that live behind a wall.

It’s definitely worth a watch if you’re after something with plenty of action and emotional back-stories that encourage the importance of courage, bravery, friendship and determination. Sure, it’s a bit dramatic at times, but it’s also a lot of fun.

The two-night special event will be on 10th-11th July in 130 cinemas across the USA and Canada.