With the theatrical release of Harrison Smith’s loooong awaited Death House just around the corner, we’ve now learnt all we need to know about the film’s ongoing release strategy.

The film repeatedly dubbed ‘The Expendables of Horror’, due to its extraordinary cast of iconic horror stars hits limited US cinemas on February 23rd, following its NY, LA and PA premieres. After a wider release on March 2nd, the film will reach international shores in April, along with its appearance on Netflix, Red Box and pay-per-view. The film will then hit Blu-ray and DVD on June 5th. You can get the full picture with the handy graph below! 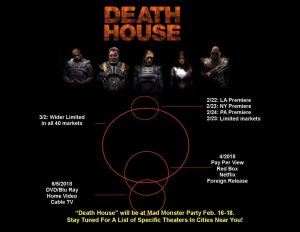 Synopsis:
Two federal agents fight their way through nine levels of Hell inside a secret prison known as the Death House. A facility-wide prison break turns their flight into a tour of horrors as they push toward the ultimate evil housed in the lowest depths of the earth.