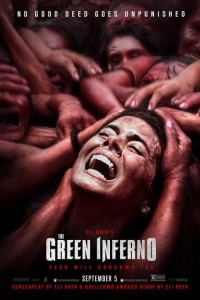 It seems to be unanimously agreed that everyone is super stoked for the release of Eli Roth’s cannibal feature The Green Inferno and we now have a new trailer for the film.

The latest trailer shows us how the group of do-gooders end up in the middle of the Amazon, caged by a tribe of ferocious cannibals, and the shear dread that encompasses them as they await their fleshy fate.

The Green Inferno will be released in theatres on September 25th 2015.

Synopsis:
One young girl and her friends are convinced they can make a different to the problems in the Amazon by traveling there to try and save the rainforest. Unfortunately for the group, it’s not only animals that roam the dangerous territory; there are also tribes that have the taste for the flesh of humans.